Succulents are some of the most popular plants out there. Echeverias, aloe, yucca, there are dozens of these plants, although that means there are a few things that you might not know about them. That includes the two major types of succulents: soft succulents, and hardy succulents. While they're pretty similar in several ways, soft succulents and hardy succulents aren't different physically. It'd be pretty easy to assume soft and hard succulents are, well, soft and hard. It's a bit trickier than that, with the two groups having different temperatures, climates, preferred seasons, and more. It can be hard to know how to take care of your succulent or even what group it belongs to.

So, let's look at the differences between the two:

The most significant difference between soft and hard succulents is the conditions where the plants can survive. After all, succulents grow across hundreds of countries in thousands of slightly different climates. As a result, there are countless minor differences in the hot, cold, wet, dry, humid, and much more.

That's why some succulents have grown to like either colder or warmer climates. The group that's adapted to colder temperatures are hard (or hardy) succulents. These grew or evolved from plants in conditions near mountains or colder areas.

You can usually tell whether or not a plant is hard or soft with a USDA Hardiness Zone Map. Soft succulents survive in zones 9 and above (-6.7 degrees C or 20 degrees F), while hard succulents can survive all the way down to Zone 4 or 5 (-34.4 degrees C or -20 degrees F).

Through this, you’ll be able to see you and your succulent’s home’s.


Is Your Succulent Soft or Hard(y)?

Soft succulents, known as Tender succulents, are featured in various shapes and colors. They are less tolerant of low temperatures compared with hardy succulents. Some of the most common soft succulents are Echeverias, Crassulas(Jade Plants), Aeoniums, Tender Sedum, and Senecios. Most of them can't survive outdoor in frost area. In USDA Zone 10+ areas(frost-free area), nearly all soft succulents can be grown outside. So it's essential to figure out which zone you are in before picking up varieties, especially in winter. It's not essential to know whether you have a soft or hard succulent until winter or a colder season arrives. While hard succulents can survive both hot and cold temperatures, soft succulents quickly die in these conditions. Hardy succulents are pretty easy to care for during a cold season. However, you need to ensure you don't ignore these plants when the temperature drops. Hardy succulents reduce their water intake in cold seasons, so you'll need to water the plants more minor than usual. Other than that, they'll go dormant, as they're built to survive cold temperatures.

Soft succulents are a bit harder to water, so you'll need to be careful to watch how much water you give them. These plants aren't just sensitive to the air, but they're also overly sensitive to moisture. Coldwater can quickly rot and put them at more risk to snap, freeze over, or put them into cold shock. So when watering soft succulents, you must water a little lighter, usually when the plants are insulated or indoors.

Thanks to how hard outdoors can be for soft succulents, they are much harder to care for during the cold seasons. So the number 1 easiest and most effective way to keep them safe is to move them indoors when it gets cold.

The hardest part of keeping them indoors is making sure they get enough sunlight. You don't have a massive ball of gas shining bright in your home, so you'll need to make sure both soft and hard succulents get the light they need. Late Fall, around October or November, you can set succulents up indoors, with a growth light or near a window to keep them warm and well lit.

In places with just a few hours of sunlight every day, you'll likely need a grow light or lamp to keep your plants alive during the cold season. For those with more sunlight, frequently leaving succulents near a window is just enough. It's important to be safer than sorry, though.

Back To Top
★ Reviews

Quality is good, delivery was fast, thank you very much!

Everything I ordered came so well packaged
And beautiful & bright 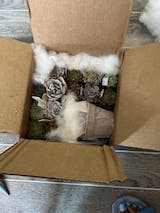 I am happy with my purchase

Quality is good, delivery was fast, thank you very much!

Everything I ordered came so well packaged
And beautiful & bright

I am happy with my purchase