How To Revive Frozen Succulents

It’s happened to all succulent growers living in a cold climate - the temperature dipped lower than expected and the succulents froze. It’s possible to revive frozen succulents with minimal damage to the plants by following a few simple steps.

Protecting the outdoor-growing plants with special frost cloth for succulents is a key preventative measure. But when you find yourself with frost damage on your succulents, follow these steps to revive them and get them thriving again.

As we know succulents are special plants, they don't need to be watered every day because they store the water in their leaves for living and nutrients. When the temperature is getting lower than 32°F, the water in their cells will be frozen, however, as we know the volume of ice is bigger than water due to the different densities.

Therefore, frost can cause the succulents' cells walls to burst then take their life. But not all succulents can't tolerate freezing temperatures, some hardy succulent varieties thrive in winter.

If you If you live in a cold area, the temperatures below 40℉ (day or night), and still want to order beautiful rare succulent types, adding a heat pack can protect the succulents from frost in transit.

If the frost was considered to be a light frost (lasting less than one hour) the tips of the succulent leaves will develop frost burn (also called frostbite), and they will shrivel and wilt. On small succulents, the entire plant may develop a dry, crispy appearance. If the frost was considered a hard frost and below freezing temperatures lasted throughout the night, the entire plant may collapse and turn dark. The plant tissue softens and is no longer able to remain upright, so it will collapse. Can The Succulent Be Revived?

If the succulent was only exposed to freezing temperatures for a short time, the chances of it surviving are very good. A little pruning may be needed to make the plant look good again but overall the plant should be salvageable.

If the succulent was exposed to freezing temperatures for longer than 24 hours, or if snow fell on it, the survival rate is slim. However, all hope is not lost, check if the substance beneath is green, if yes, it indicates they still have a chance to sprout in spring. How To Treat Frozen Succulents

The thick leaves of succulents store a great deal of water, as do the plant bodies and stems. Freezing causes massive cellular damage both inside and outside of the plant. However, many succulent varieties are remarkably hardy and will recover if treated properly.

The first thing to do is to bring the plant away from frost, snow, and freezing temperatures. Cover them with frost cloth for succulents, bring the plants indoors, or otherwise place them in an environment that will protect them from further frost damage. Click here to learn more about how to care for succulents in cold winter.

Wait a few weeks. Succulents go into dormancy and stop active growth when the weather cools down. Different succulents grow at different rates within a year depending on the temperature and will go dormant at different times. The status of the winter dormancy may help the succulent overcome being frost-damaged. Don’t do anything to the plant until its dormant time has ended and active growth should begin. After that, start your work.

Click here to learn how to water your succulents in winter.

Things that you will need to treat frost damage on a succulent.

Only time will reveal if you have been successful in reviving a frozen succulent. If the new growth continues, you have success. If the remaining leaves become discolored or softened, your attempt to revive the plant has failed.

To prevent frost damage in the future, be diligent in using a frost cloth for your succulents during the late fall and winter months. Even late spring can bring a surprise freeze, so don’t let your guard down until summertime.

If succulents are being grown in pots outdoors. Place the succulent pots near an exterior wall that will provide protection from the wind.

Rotate pots (indoors or outdoors) so plants will have equal sun exposure. How to Care for Mini Succulent Plugs

How to Help Cactus Survive in Winter

So pretty and full, it was bigger than the 2 inch pot! 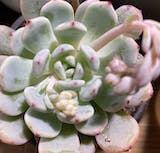 Arrived quickly! Just as pictured! Would highly recommend! Thank you very much!

The plant came perfectly 0acked, received quick and oh what a beauty she is!! ❤️ Thank you!!

Well made and came with a drainage hole. Exact what I needed for my plants!