Add the 72-hour heat pad in the order if you live in a cold area.

We all love succulents, but we fear the idea of them dying. Many factors can cause succulents to die. Sometimes it's our fault, and often it's nature's fault.
The succulent dies at the time of a dying bloom because it has to redirect its energy into producing the seeds and flowers.

In this article, I'll examine monocarpic succulents, death blooms, and their meaning. After this article, you'll clearly understand the information and issues regarding the Succulent death bloom.

What Is A Death Bloom?

"Death bloom" refers to the act of a plant dying when it has bloomed and produced seeds.

The seeds' production causes hormonal changes within the plant that redirect resources and energy from the roots and leaves to the seed production, and ultimately, the plant will die. The death bloom only occurs every once in the plant's life once it has reached a point where it can reproduce. For succulent plants, that would be, at the very least, a few years, possibly even as long as the age of 80 for some Agave species.

If your succulent blooms several times such as Echeverias, Crassula succulents and Sedum succulent varieties, it doesn't make a death bloom. Death bloom is a normal aspect of the annual succulent plant's lifecycle, like Sempervivum, Agave, Aeonium and so on, that wilt and then die after producing seeds and pups.

What Are Monocarpic Plants

Monocarpic species are known to bloom only once and then fade away in the following year. They aren't limited to succulents only. There are also monocarpic species like the sunflower, cabbages and tomatoes.

This doesn't suggest that monocarpic plants have extremely short lifespans. Many remain alive for years or even decades before blossoming and dying.

The term "monocarpic" originates from two Greek words Mono (single) and word karpos (fruit). We can conclude that the plants blossom to release seeds. Once they do, their primary function in life is completed and ceases to exist.

Below, we will discuss some of the most common monocarpic plants:

It's easy to spot a blooming Sempervivum once you know what to look for. Parent rosette leaves, or the hen, close in on themselves before it blooms. Then the rosette will grow, producing a scaly flower stalk that can reach 10 inches tall.

At the same time, the base rosette will often start to tilt to one side.
It's an impressive sight and a cue to take cuttings if you need offsets available at the base of the parent plant. This propagation method is less foolproof than transplanting rooted offsets, but you may be successful. A Flowery End for Sempervivum Succulents

Agave is a kind of succulent, often mistaken for the cactus. Be aware that all succulents are succulent plants. However, not all succulents are cacti. The major distinction between agaves versus Cacti is the absence of leaves. Cacti don't have leaves, whereas they do in agaves. Different varieties have different blooming periods. Some branches develop faster, while others take some time to grow.

The life span of your agave succulent depends on its verities of species. Some succulents can live up to 80 years, while others can last up to 8 years.

Aeonium is a genus that includes around 35 succulent plants with unique, glossy, waxy leaves arranged in rosettes.

The leaves with rounded edges of rosettes are so perfectly rounded that they are often confused with artificial plants. The signature rosettes are solid or multicolored in yellow, white, green, red and white. Aeoniums can be cultivated anywhere in your garden at any point in time. They are slow-growing plants. Growing tiny bouquets of blooms from the center of rosettes could take as long as five years.

Most aeoniums are monocarpic, meaning that the mother plant dies once it has bloomed; however, the young (shoots) continue to produce new shoots.

Death bloom succulents generally have a flowering stalk long starting from the apex or middle in the center. The length of the stalk will vary depending on the kind of succulent you own.

The hallmarks of a succulent death bloom are that it has only one single stalk, long and extending upwards from the apex or at the center of the plant. If you observe succulents growing stems from other places, such as the layers of Echeveria, it is a normal flower. At the beginning of dying blooms, the stalk of the flower is likely to form buds. These will then blossom to form tiny blooms. When the flowers have finished blooming and the succulent begins to die, they will fade over a few months or days.

In terms of the flowers, the majority of the funeral blossoms we saw featured warm shades of oranges, yellows, and pinks. There were also rare instances that they were so breezy and light that they appeared almost white.

Based on the species and the species, the length of flower stalks can range from just a few inches up or even 30 to 40 feet.

How To Save A Flowering succulent?

It's possible to keep a monocarpic succulent alive if the flowers are cut off before seed development begins or if flower buds are removed before they bloom.

If you have a monocarpic succulent plant that is starting to flower, you can do one of two things:

1. Cut off the flower stalk before it blooms – This will encourage your succulent to put its energy into growing new leaves and roots instead of flowers and seeds. It may also help the plant live longer overall. 2. Let the flowers bloom – If you enjoy seeing your succulents bloom, let them be! Just be aware that once the succulents has bloomed and died, the plant will start to die off too.

Do Echeveria Die After Flowering?

Echeverias are not monocarpic flowers; therefore, the soft succulents don't end up dying after flowering. They generally produce beautiful blooms that are vibrant and beautiful. They remain in bloom for a long time, so you can take pleasure in their beauty for a long time.

While Echeverias in bloom can be more popular, it's best to get rid of the flowers. It will keep its growth and energy within the plant. Typically, echeveria blooms during the autumnal months of late summer and early fall. But, the bloom timing may vary depending on the kind of echeveria you're cultivating. The entire article concluded that death blooms, also known as "succulent deaths" and "end-of-life blooms", occur naturally as a phenomenon that happens in some succulents when they near the close of their life cycle.

It is likely that now you are aware of all the information and concerns regarding succulent Death blooms.

Why is Christmas cactus Dropping Leaves?

Fast shipping! All succulents are very healthy and beautiful, exceeding our expectations. 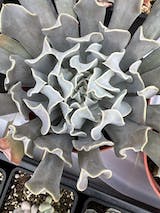 Arrived during a very cold snap and I didn’t buy a heat pack but they all came of it well. I can’t wait until it is sunstressed to see the beautiful colors. It’s healthy and thriving.

I love Rosettes,so the 8 Assorted Rosettes is my favorite,but Maybe because the weather was too cold, some of them were melted when they were shipped.,

Dear customer,
Thanks for your review.
Succulents shipped at temperatures below 40℉ may be at risk of frost, so we offer our customers the heat pack option to protect the succulents. It is the responsibility of customers living in colder areas to purchase heat packs.
If you have any questions, please feel free to contact me.

This plant is beautiful. It was wrapped nicely and arrived safe. Thank you 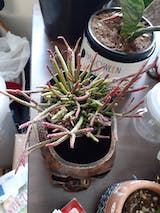 A lovely and unusual plant -- very healthy and good size for the money!